Charles Sturt University student Anthea Marriott has won the Quantium Data Science award for future leaders, part of the Top 100 Graduate Employers 2019 announced on Wednesday.
And consultants Deloitte took out the award for the company most in demand among university students looking for an internship or job.
Ms. Marriott who comes from Cumnock in Central NSW is one of 10 graduates who took out awards recognizing achievement across the economy, including in engineering, law, consulting, banking and financial services and data analytics. 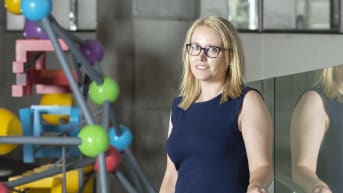 Anthea Marriott won the Quantium Data Science award for future leaders and says she really wants to work for a tech company. Louie Douvis
The awards are run by GradConnection, which links university graduates with future employers and The Australian Financial Review.
“I really want to work for a tech company. My interest area is AI and data analytics,” said Ms. Marriott who has degrees in mathematical science and accounting and has just started an internship with Microsoft.
“I’ve had quite a different experience to many people. Coming from the country there have not been a lot of opportunities. I’m excited about my Microsoft internship, they have a high employment rate for women.”

GradConnection director Daniel Purchas said data analytics and artificial intelligence has been the standout area for graduate employment in the last 12 months.
This year the data analytics company Quantium ranked No. 9 for student demand, a huge climb up from the No. 30 slot it held last year.
IBM, Telstra, and Apple were all in the top 20 most sought-after companies. IBM is the third most in-demand for graduate jobs internships, up from No. 4 last year.
“There’s been a huge increase in demand for data analytics,” said Mr. Purchas. “It started with the federal government which wants much more accountability and more measurable results in all sorts of industries. And in its own departments. And it just spread.
“It’s not just crunching numbers. It’s about looking for patterns and being able to draw conclusions. These are not statisticians who are getting jobs. They’re not nerds. These are people who can rotate data to draw conclusions we could never have reached before.”
He said demand was running hot and companies could not find enough people with data analytic skills. He welcomed the fact TAFEs are developing more data qualifications, so companies were not reliant on universities to plug the gap.
He predicted more international students with data skills would get jobs in Australia – despite the difficulties for finding visas for them.
‘We cross all industries’
Quantium chief executive Adam Driussi said 16 years ago when he founded the company it was a struggle to find anyone who could even talk about data analytics.
Now they were working in every sector of the economy.
“Graduates really want to work for us. We do all the Silicon Valley stuff – to make it a nice place to work. But it’s what we do that is in demand. Machine learning, predictive analysis, that sort of thing. And we cross all industries. Retail, health, banks, insurance, media. We have Australian data scientists working for Walmart in Arkansas. We’re working at the centre of change in the global economy.
“It’s like businesses have woken up. Now they’re all looking at data and artificial intelligence. 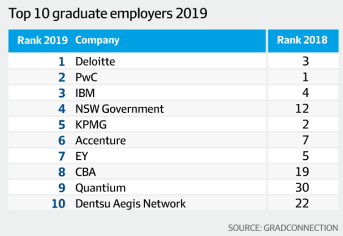 The traditional consulting business is also a big draw card for graduates. Deloitte was the No. 1 company in the Top 100 Graduate Employers measured by student engagement with the company among the nearly 200,000 students registered with GradConnection.
PwC came second after Deloitte and KPMG, Accenture and EY were all in the top 10.
Deloitte’s head of graduate recruitment Tanyth Lloyd said the demand for Deloitte as an employer reflected the diversity of jobs within the company.
“People don’t always know what they want to be. Deloitte is attractive for learning mobility and being able to swing between practices. Yes, we do corporate accounting. But we also have jobs for geographers and mathematicians. 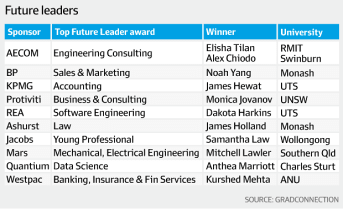 “We talk about the 100-year life. That means continuous learning and reinventing yourself.” 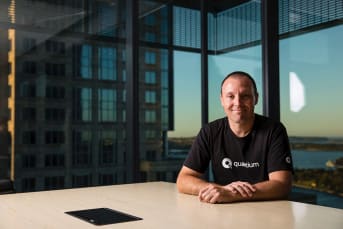 South Australia needs to boost its migration intake, here is what the experts say Top tips to get your dream job