Economic experts have warned the Government faces a challenge in meeting its new jobs target if it restricts migration, and even if it does deliver on its pledge, Australians may not be the ones to benefit.

Prime Minister Scott Morrison delivered a pre-election promise in Brisbane to create 1.25 million jobs over the next five years. It follows a similar pledge by Tony Abbott prior to the 2013 election to create 1 million jobs by 2018.

Peter McDonald, Emeritus Professor of Demography at ANU’s Crawford School of Public Policy, said it was an “achievable” target and that a recent projection of labor market demand by Victoria University had already earmarked a similar level of demand.

But he also noted migration was the largest contributor to the growth in employment numbers in Australia since 2013, ahead of the growing trend for older Australians to stay in work. The permanent migration program was reduced from around 190,000 to just above 160,000 in the past two years.

“You get, basically, growth in jobs pretty much anyway — over time, there are more Australians, that typically means more jobs, but it does get more complicated than that,” Mr. Richardson said.

“An ageing population means more people are retiring, that makes it harder.

“The migration debate — if it means winding back the number of migrants — that also makes it harder.”

The Department of Jobs’ Employment Outlook, released last year, projects employment to increase by 886,100 over the five years to May 2023.

Mr. Richardson said the ratio of new skilled adult migrants to jobs growth was “pretty much one to one”, despite community concerns over migration fuelled by “barbecue logic”.

“People think, ‘well if migrants arrive, surely they’re taking jobs and if other things are equal, that means less jobs for everyone else’,” he said. 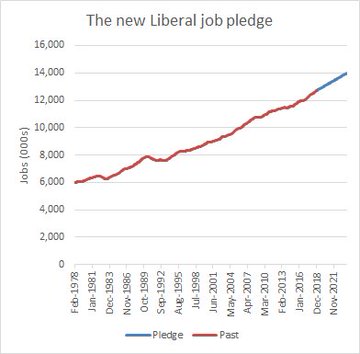 Job growth needed to meet Scott Morrison’s new pledge of creating 1.25m jobs in five years #auspol
“If somebody puts up a hand to take a job — a migrant, a married woman, a Martian — they get the job, they earn the income, spend the income, then create the next job.”

Professor McDonald said if the Government restricted permanent migration, the employees needed by Australian businesses would not come from the ranks of the local unemployed.

“If labor demand is strong, and permanent migration is not filling the demand, then it will come from temporary migration or New Zealanders,” he said.

A reduction in immigration, he argues, would not necessarily lead to more jobs for Australians.

“There’s about 12 percent, say, of prime age, potential workers who are not employed, and it’s been that figure for 20 years.

We’ve had a lot of programs, spent a lot of money over that 20 year period, but that 12 percent has not shifted at all.

“I think we’ll need to be looking at something much more radical than what we’ve been doing.”

Mr. Morrison told ABC that the focus in employment growth over the next five years will be on full-time jobs.

“They’ll be full-time, and that’s been our record over the last five years,” he said. The majority of the 1.14 million jobs created between September 2013 and September 2018 were full-time, although more than half a million were part-time.